During the first year, admission to the Zoo was free, due to the creation of the São Paulo Zoological Gardens Foundation (in Portuguese, the Zoo is known as Jardim Zoológico - Zoological Garden), and since 1959, a symbolic fee has been charged for admission. The Foundation went on to achieve status as a legal entity, as well as achieving administrative, financial and scientific autonomy.

Aware of its responsibilities within the context of conservation in Brazil, the São Paulo Zoo became the first Brazilian institution to propose and effectively and decidedly participate in multiple programmes for the recovery of Brazil's endangered species, such as lion marmosets, neotropical felines, Lear's macaws, and miniature blue macaws.

In 1994, after meeting all demands set out in the relevant legislation, the São Paulo Zoological Gardens Foundation was classified in the "E" category, the highest classification awarded by the Brazilian Institute for the Environment (IBAMA); the Guiness Book also appointed the São Paulo Zoo as the best one in Brazil.

In May of 2001, the area occupied by the company "Simba Safari" was incorporated into the São Paulo Zoological Gardens Foundation and was opened to the public as the "Zoo Safari" on June 5 of that same year. The Simba used to be just like an African Safari: an area where animals (including lions and tigers) lived free, and not inside cages or pits; since the merging with the zoo, however, some of the animals were put into cages. Check out the site of the Zoo Safari and these photos and movies by a visitor.

Occupying an area of approximately 900 thousand m², most of it covered by the Atlantic Rain Forest, the Gardens are home to the wellspring of the historically important Ipiranga stream, whose waters form the lakes that welcome numerous species of exotic and native birds, as well as migratory birds.

Currently the overall population of the São Paulo Zoological Gardens Foundation surpasses 3,200 registered animals, representing approximately 200 species of birds, 100 species of mammals, and 98 species of reptiles, as well as amphibians and invertebrates. Examples of some very rare species are to be found, such as the white rhinoceros, Spix's macaw, Lear's macaw, and lion marmoset, among others.

On the scientific scene, the São Paulo Zoo has made a highly significant contribution, especially on matters relating to problems of Brazilian animal life. Its technical and scientific contacts with other research centers ? including the Butantan Institute, the Biological Institute of São Paulo and the Adolfo Lutz Institute have contributed greatly to this effort, as have the cooperative agreements already signed with several universities, such as University of São Paulo, Julio de Mesquita Filho State University UNESP and the Federal University of Santa Maria (in the state of Rio Grande do Sul).

With approximately 1,600,000 visitors annually, the Zoo offers its public guided tours, courses for teachers, nighttime strolls, and instructional presentations on the animals and on other aspects of preserving the environment. 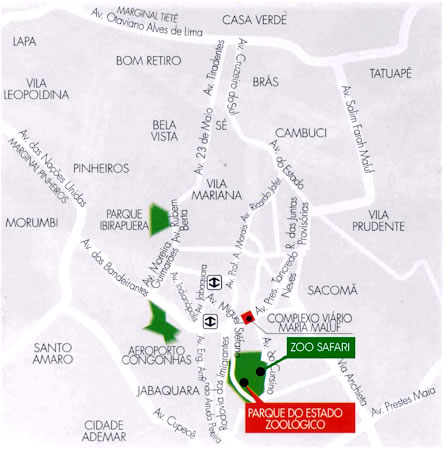 How to get there: the easiest way is to take a micro-bus which leaves from station Jabaquara of metro; it is possible to buy the ticket entrance and the transportation at the metro; see more info.
To visit the Safari, it is possible to go with your own car or to take a van with guide. The tour is 4 km long and takes about one hour. Visit the site of the Simba for more info.