The foundation of the city of São Paulo

The village of São Vicente, the oldest in Brazil, was founded in 1532 with two main purposes: establish the sovereignity of Portugal over the new lands; and establish a basis for further exploratory movements towards the West.
In 1549, it was becoming clear that the system of Captaincies would fail in Brazil (by this system, which worked very well in the Portuguese possessions in Africa, the King granted rights to Captains to settle in the colony; Captains would invest their own resources to explore the colony, would pay taxes to the Crown, and would keep profits and exercize power in thier Captainies).
Portugal decided to send a General Governor, Tomé de Sousa, to whom the Captains should report. Tomé de Sousa chose Salvador, in Bahia, as the administrative center of Brazil (see History of Bahia).

Along with him, Tomé brought the first Jesuits to Brazil, led by Manoel da Nóbrega. The Jesuits, members of the Society of Jesus, should devote total dedication to Jesus; the Society is structured in a rigid hierarchy. In Brazil, the Jesuits should evangelize the Indians; by doing so, they were indirectly helping the Portuguese dominate the rebel tribes.
Manoel da Nóbrega spent some time in Salvador, but he didn't get along with Pero Sardinha, the Bishop sent by Rome; some History books say that Nóbrega was much more religiously devoted and had a much stronger character than Sardinha, hence the struggle. Sardinha (which in Portuguese means 'sardine') would eventually be eaten by anthropophagic Indians.

Manoel da Nóbrega moved South, to Porto Seguro, then Rio de Janeiro, and eventually the village of São Vicente. In 1553, Portuguese explorers were trying to find a path to the city of Asunción, in Paraguay, which could be a basis for further explorations in search of gold. At the time, Manoel da Nóbrega learned that, in the prairies up the mountains from São Vicente, lived a Portuguese called João Ramalho, who had been living with the Indians and got married with the daughter of the chief Tibiriçá.
With help of Indians who knew the trails of Serra da Mantiqueira, the explorers, in search of gold, and the Jesuits, in search of souls, walked up the mountains.
Nóbrega met Ramalho, and together they formalized the foundation of Santo André da Borda do Campo, where Ramalho and his Indian family already lived. 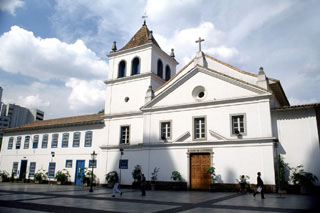 Manoel da Nóbrega and his jesuits started to evangelize the Indians. In 1554, moving a bit North of Santo André, Nóbrega found a place he found perfect to settle: on top of a small hill, in between two small rivers (the Tamanduateí and the Anhangabaú).
In that place, on January 25th 1554, Nóbrega celebrate a mass dedicated to Saint Paul, and laid the cornerstone of the Colégio de São Paulo, the school where Indians would be taught. That college was the starting point of the city of São Paulo.

The College still exists (see photo), and is one popular tourist spot in São Paulo. Of course, it was refurbished many times, and little of the original building remains, but the overall aspect was maintained. The College is usually referred to as "Pateo do Colegio", which means School Backyard.

Visiting the Pateo, one still realizes that it is situated on the top of a hill. The street Rua General Carneiro leads downhill to the river Tamanduateí. The famous Viaduto do Chá crosses over the Vale do Anhangabaú; this valley is once there was the river Anhangabaú.

The leader of the Jesuit group which founded São Paulo was Manoel da Nóbrega. However, History books make constant reference to another priest, José de Anchieta; Anchieta was just an assistant at the time of foundation of São Paulo, but later on he was the one person who most got engaged with Indians education. Anchieta is called Apostle of Brazil, and there is a movement to canonize him.